For $99 per month Twitter users have the option to automatically promote their tweets. Nothing ventured, nothing gained, so we gave it a go.

It’s helped to grow my business and raise my profile (@StuGoulden), but at a cost. Not all the attention I get is positive. Over the years I’ve experienced far more than my fair share of harassment and remain constantly frustrated by Twitter’s inability and unwillingness to act on its own T&Cs.

Nevertheless, the good outweighs the bad, and I wanted to see how Twitter Promote Mode might help my business and one major project I needed to shout about in December. But more than anything I wanted to feed my curiosity, so I coughed up the $99 (£79) for a month’s paid promotion. 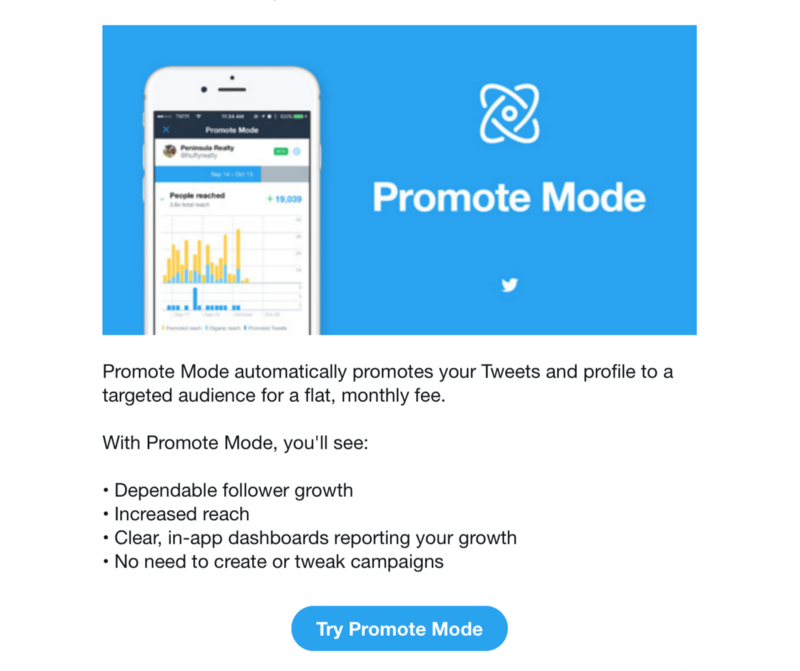 Like all others trialing the service, I received and responded to this email offer. The cost: $99 per month.

You can amplify your reach based on two targeting criteria: Interests and Locations. The former brings up these options: 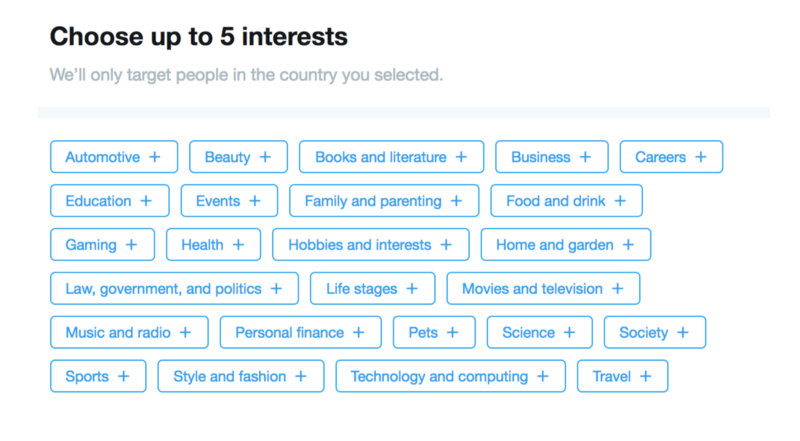 That’s it. Once you confirmed your location, targeting criteria and the $99 subscription, you’re good to go. Simple. 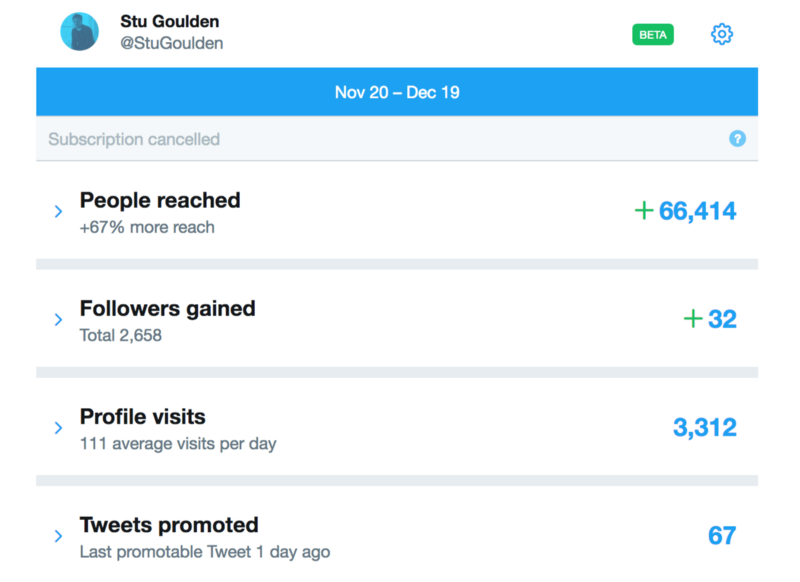 For comparison, below are the results of Matt Navarra, Director of Social Media for The Next Web. He is far more prolific on Twitter than I and has the followers to back that up (25,100 at the last count). However, Twitter Promote Mode seemed to do a lot more for me as a generally sporadic tweeter with c2,500 followers.

Today is the last day my account has Twitter’s Promote Mode active.

Here’s what 30 days of the $99 p/m Twitter feature generated pic.twitter.com/G8SWxxwfNY

My detailed results are below. You’ll see Twitter Promote gave me 67% reach than I would normally expect and claims to be behind 32 new users. This was far below my original expectations. I have no idea why I gained the majority of these on 1 December 2017 either. 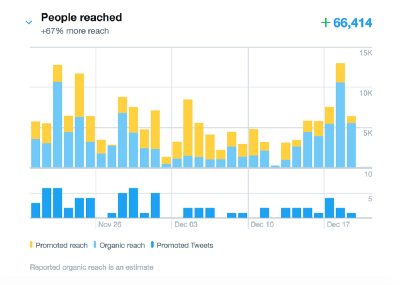 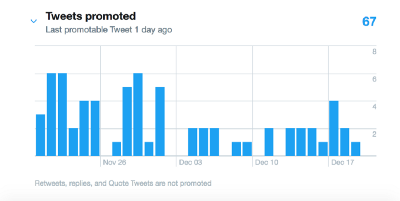 Tweet Carefully. The ease of setup and automatic nature of promotion were huge selling points, however I wasn’t sure whether Twitter would promote all eligible tweets or a random selection. Retweets, replies and Quote Tweets are not promoted, that’s for sure. But everything else is a mystery. This forced me to put a lot more thought into every Tweet I published.

Precious Timelines. I was worried about intruding on the timelines of people who weren’t already following me. I still have no idea how these tweets appeared and to who (existing followers, similar audiences, others using the given hashtag or keyword). I was definitely blocked at least once by a non-follower, but not before he sent me an angry reply.

Poor Conversion. I’m really intrigued why my 111 daily profile visits only resulted in an additional 1 follower each day. Perhaps my profile needs a rewrite. Who knows.

Early days. Although the service is in beta, we can be confident of two things: 1) It will be more generous with its promotion to early adopters like me, 2) It will evolve with feedback. It will be interesting to see what it looks like and how much it costs in six months.

Ideal for Medium. I’m a happy paid Member of Medium, however I can’t help but think this is the one benefit missing from their membership model. Giving good articles written by people with fewer followers a chance to be read. Medium can be a bit of a ghost town for new writers and I’d pay for my early posts to get boost to the right audience.

So, would I do it again?

Whilst I gained drastically fewer new followers than I would have hoped, the other results seemed in line with expectations. It’s for that reason that I might reactivate Twitter Promote Mode in the future, but only when I had something more pressing to say or in need to promote.

In order to get the most out of the service you really need to be publishing upwards of one hundred tweets a week. A team or dedicated social media manager are therefore much better placed to max out the added reach and reap the rewards. Twitter Promote Mode is definitely onto something, it just needs to tweak the formula.