Elections are about change and nothing is changing elections more than digital marketing.

Today is the day. You’ve heard the speeches, read the manifestos and watched the debates. Now it’s time to cast your vote. The future of the United Kingdom is in your hands.

The outcome of the 2017 election isn’t as clear cut as it was a few weeks ago. A betting man’s money will probably be on a narrow Conservative majority but there’s an outside chance of a hung parliament and a Labour majority still isn’t off the cards. It’s worth noting that the odds on Donald Trump being president on the final day of the US election were greater than Corbyn’s right now.

It’s margins like this where marketing can really make a difference. I’m certain it already has.

Whether you choose to fight clean or dirty, your digital competence can win or lose you an election.

Insight for the many, not just the few.

If you know where to look it’s never been easier to cut through the noise and get straight to the facts thanks to a plethora of digital tools making politics more transparent.

Democracy heroes include the volunteer-run Who Targets Me?. It’s a clever browser extension that tells you the targeting criteria of party adverts you see on Facebook. The unrivaled targeting potential of Facebook means it swallows up nearly all online political advertising spend. Of the £1.6m spent on online ads during the 2015 election, £1.3m lined the pockets of Facebook. Remarkably £1.2m of that was spent by the Conversatives who found the precision at scale far more effective than traditional doorstepping. Labour have followed suit this election, apparently serving up 1,200 different adverts and with this level of personalisation people can form views very quickly on only a single issue.

For now personalised political ‘dark ads’ are an unregulated Wild West outside of the reach of the Electoral Commission.

By analysing its aggregated data Who Targets Me? can start to shed some light about which demographics are being targeted and the variations of message being served.

Election campaigns run on donations to the major parties but crowdfunding is allowing citizen-led campaigns to also get in on the act.

Since the snap election was called in April millions has been raised for this purpose. Hope Not Hate’s opposition to UKIP is powered by people’s donations, Best for Britain has raised £370,000 to back candidates opposing a hard Brexit and crowdfunding is getting plenty more diverse voices into the fray.

Money underpins a huge proportion of what’s wrong with politics

The need to raise money, whether that’s huge amounts of money, as is needed in the U.S. to run for federal office, or even small amounts at the state level — you’ve got to raise money to do your campaign. And typically, that forces you to do things and say things and take positions that are not actually what you believe.

Of course, it’s not always about who has the largest war chest. Trump spent only half of what Clinton did on his way to the presidency ($334.8 million vs $623.1 million). Leave spent only marginally more than Remain (£16.4 million vs the Remain side’s £15.1 million).

Money certainly helps though. Full Fact has been factchecking the election thanks to £100,000 raised via crowdfunding and Democracy Club has been helping people find out about their local candidates and find their nearest polling station online.

Cast your vote where it matters most.

Another way to rise up and revolt is to do as much damage as possible to the incumbent party with your vote. Students have been using the ge2017.com/students tactical voting tool that tells them to where their vote will count this election: at their residential or university constituency. In addition to being a useful tool in itself, it has also boosted registration numbers showing young people that their vote really does count.

The power of youth.

Whilst a healthy democracy needs to pay attention to young people’s needs and listen to their demands, there’s only one party that stands to win from their vote. It seems the future belongs to Labour.

The good news for them is that a million young people registered to vote for the first time in month since the election was called. Given 18–24 year olds voting turnout rates have been a paltry 40% in the last three UK general elections from 60% in the early 90s, it’s fair to say something is causing this change. And it won’t be a gimmicky filter or badge.

It seems, for once, that young people are actually being engaged on issues they care about, one way or the other. And the negative dark ads are not demotivating them.

Snapchat has been a key engagement channel in this election. The app has hosted Our Story in its Discover section for the party leaders to answer questions from its 10 million daily users and promote shortform manifestos. It’s refreshing to see young people being treated as young adults rather than children.

Preaching to the converted is easy. It also makes you incredibly complacent.

The Conservatives went into this election with a cult of personality highlighting Theresa May’s perceived leadership qualities. However, the first rule of leadership is to be present yet her campaign has rarely taken her out of her comfort zone.

Corbyn, on the other hand, has always had his narrative defined for him and so needs to work harder. He has made himself available to the public, taken part in TV debates and is getting significant airtime for the first time. When 20% of voters are said to be undecided in the weeks before vote day, it’s the smarter of the two strategies. 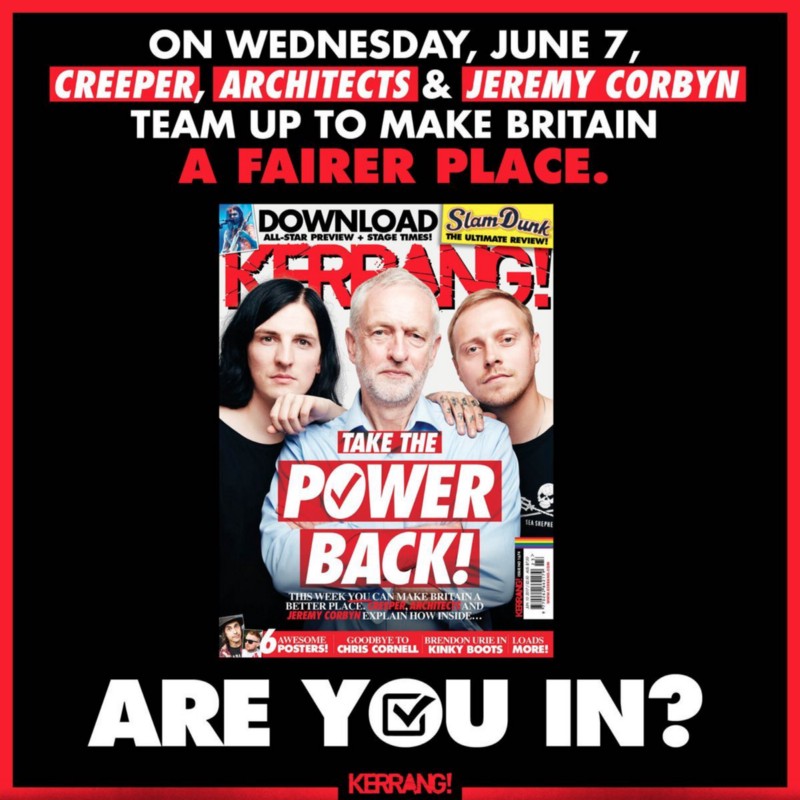 With a smaller advertising budget, it’s also a cost effective way to be heard. Labour have courted innovative media partnerships with the likes of Kerrang! and LadBible, and endorsements from youth influencers Rag’n’Bone Man and Stormzy. Whilst they may seem unlikely bedfellows all of the above share Corbyn’s anti-establishment brand values.

Zig when your opponent zags.

Whilst the killer blows are still traded in traditional media, it’s online where parties spar.

The immediacy and flexibility of digital marketing is perhaps its biggest strengths in a snap election, when time is tight and punches are traded almost daily. Take “dementia tax”. Within hours of the term getting traction the Conservatives were running Pay-Per-Click adverts on Google searches trying to dispel the accusations against the contentious policy.

In another swift attack, a Trump-style advert showing Jeremy Corbyn opposing anti-terrorism legislation was released by the Conservatives on Facebook and YouTube in the days after the Manchester bombing. It has since gone on to become the most watched advert in British political history.